The legend of St Walrick

In the seventh century, probably about the time of Charlemagne, there was a band of heathen robbers who operated in the marsh area near Nijmegen. They were known as Hoemannen which gave Heumen its name (Heumen is an area in the province of Gelderland).

The Hoemannen controlled a strategic area .

Since the departure of the Roman invaders this busy trade route was unprotected. This meant that robbers could lie in wait and attack unsuspecting traders. 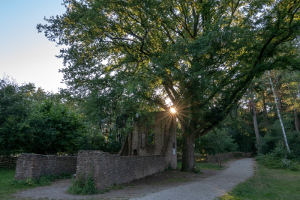 On an autumn evening a group of travellers were ambushed by de Hoemannen.

The group had no goods or weapons and the guides all fled in panic into the forest.

One man didn’t flee. A large imposing man without any weapons which, in those times, was exceptional. So the robbers decided to take the man to their leader Walrick.

When these two men met they realised immediately that there was a connection. Both strong willed men, used to giving orders and prepared to take risks, both leaders of men.

Willibrord told of a new religion, a new social order and of gods mercy.

While Willibrord was explaining this new religion a heathen priest  informed Walrick that his daughter who had malaria, an illness which was common in those days, especially in the marsh areas where the robbers operated and lived, would not survive the night.

Warick gave Willibrordus an ultimatum. Prove the mercy of this new god and save is daughter or be put to death as a false prophet.

According to the legend Willibrordus healed Walrick’s daughter and to show his gratitude Walrick was baptised and converted to Christianity. He ordered all his tribe to do the same. Anyone who refused was put to death